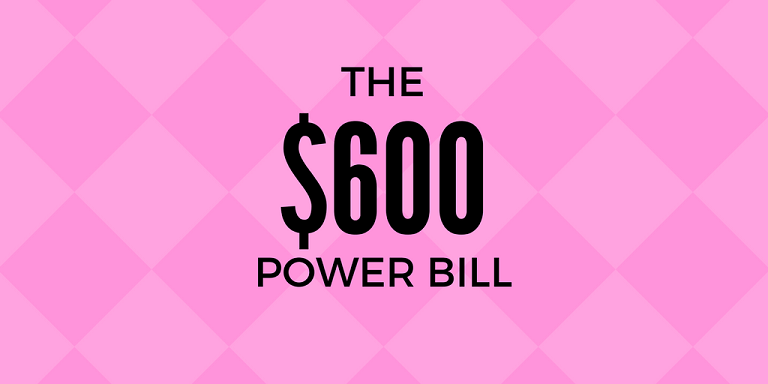 About four years ago, we purchased our family home in Napier to house our growing family.

Our home is a 1912 villa, renovated and extended from its original two bedrooms to a more spacious three bedrooms around 2005.

All in all, the house is modern, well insulated and should have been pretty energy efficient. However, our first power bill was out-of-this-world expensive.

Let’s find out why it was so expensive and how I solved the problem.

After the first month being in our new home…. WOW.

Our power bill for May was over $600, so a seriously expensive power bill.

By comparison, we had just left a rental in Hastings which had a monthly power bill of less than $200 per month.

I couldn’t understand why, with the same size household and same appliances, our power bill had suddenly tripled.  Something was seriously fishy.

So I got investigating.

The way the house is wired for electricity assisted me in tracking down the source of the issue pretty fast.

The dual meter setup in the house includes an uncontrolled or ‘anytime’ meter and a controlled meter.

Our power bill showed that the controlled meter was using five times as much power as the rest of the house. OUCH.

How much hot water were we using exactly?!

Our Hastings rental water heating was around $100 a month, so I struggled to understand how this had jumped to $500 per month.

Initially, I guessed that there was a hot water leak which would result in energy literally flowing out of our house.  But after a good amount of crawling around under a dusty house, I was both grumpy and couldn’t find the leak.

Having a chat to a smart electrical inspector the next day, he was certain it was either a leaking pipe or an incorrectly set temper valve.  A what?

As I had it explained to me, water is heated in your cylinder to a temperature set by your thermostat.

Modern thermostats typically have a minimum temperature of 60 degrees Celsius, to prevent the growth of Legionella bacteria.  This minimum is specified within the building code for modern cylinders like ours.

In a house with small kiddies (or oldies) however, some caution is required.  At 60 degrees Celsius, a child’s skin is burnt in just one second, compared to 40 seconds for water ten degrees lower (50 deg C).

Our house has the hot water cylinder close to the kitchen, so not much heat is lost between the cylinder and tap.  Therefore the tap temperature needs to be lowered.

Lowering of the tap temperature can be achieved by a tempering valve on the outgoing hot water pipe, which mixes fresh cold water with hot water exiting the cylinder.

The setup at our place had a temper value and looked like the following diagram.  The hot water was directly mixed with cold tap water before heading off to the tap, shower etc. 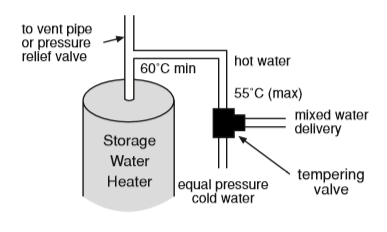 What I established was:

This means that the cylinder was heating our hot water almost to boiling point and then mixing it with a heap of fresh cold water to make it a bearable temperature again.

As a test, I set the temper value to a minimum (only hot water was passing through) and reset the cylinder thermostat to the minimum.  Which was a smidgen above 60 degrees.

The next day I popped a thermometer under the kitchen tap.  The water was around 55 degrees and all seemed okay, so I left it like that to see what would happen.

The June power bill arrived and WHAM!  $220 including GST.

Around 2/3 less than the previous month.

Checking and resetting the thermostat and temper valve was saving almost $400 per month!

I had two thoughts –

2 – Measure the hot water temperature at kitchen and bathroom taps

3 – Adjust your temper value (if fitted) to achieve a suitable outlet temperature.