I thought it might be interesting to publish our family energy bill each month.

We are a family of four living in a four bedroom, two bathroom 1980’s house.

We have gas hot water and a gas hob for cooking.  Everything else electric.

Nothing much to report this month.  Longer days and brighter mornings, plus a warm spring with minimal heat pump use have resulted in our lowest power bill in a long while.

Nothing much to report this month.  Longer days and brighter mornings, plus a warm spring with minimal heat pump use have resulted in our lowest power bill in a long while.

Interesting note:  We replaced our inefficient 1990’s Vulcan gas heater (which used $90/month of gas) eight months ago with a modern Rinnai Infinity – but for the first 4-5 months it kept using $70-80/month which seemed high. Now it has settled around $55/month on average as expected (see below from Sept 2018 for justification / payback period).  I wonder if new gas heaters have a ‘settling in’ period where they are less efficient for a few months?  Strange.

So I made a big boo-boo during January.  While cooking tea for the kids I left the bath running and flooded our house (both floors). Soaking the carpets and flooring.  We had commercial dryers & dehumidifiers running for a whole week (at 9kW peak load!).  Hence the expensive power bill 🙁

Thankfully as I write the house is dry and we have new carpet down. So everything is back to normal… finally.

This will give us more outdoor space (the Freeloader was large and in a silly location) and I am expecting will lower our gas cost per month from $90 to $60-ish on average, which gives a rough payback period of 7 – 9 years.

By comparison, the heat pump as has a rated power input of 1.7kW for 7.3kW of heat output and can heat the house easily within 30-45 min.  Efficiency.

On average we should save approx $2-3 a day compared to the underfloor (maybe more, because we often forget to turn the underfloor off before going to bed) which gives a rough payback period of around 8-10 years.

A couple of things massively influenced our power bill during July:

1 – We have been keeping the house warm using the existing underfloor heating system (Hotwire 3kW) which is expensive to run.

2 – There is an old spa pool, which I decided to get up and running for fun.  It is a nice luxury… but also poorly insulated needing $6 – 7 of power per day to stay hot (more than $2000 per year).  So after two weeks, we switched it off again.  The spa experiment used about $90 of power over the two weeks.

26th June Update:  I have crunched the numbers on our family power consumption and pricing for the last 16 months with Flick Electric Co.

Conclusion:  We are switching power company. Better deals to be had elsewhere for our family.  More info to follow…

As suspected – gas consumption is a LOT more than our previous setup.  Nathan needs to look into replacing the water heater with something more efficient.  Another project coming up!

* Big changes this month – we have moved house!

A little bit larger than our previous place, we now have four bedrooms and two bathrooms, but also less energy efficient.  Lighting is a mix of inefficient 1990’s incandescent & halogen lighting which I have already started replacing with new LED downlights.  Not much in the way of heating or cooling – but we are looking to put a heat pump in soon.

On the gas side of things, we have moved from a modern continuous flow gas water heater to a 21-year-old Vulcan Freeloader 300. The Vulcan looks like it’s a combination gas water heater and water storage cylinder. My gut feeling is that the Vulcan is going to use a lot more gas than our usual $55/month – but time will tell.

Because of the move, $ this month are likely to be a little messed up – as they will cover two properties for the last week of May.  Should settle down by the June billing cycle.

Heated towel rails kicked in again this month…. but warm towels are worth it.  Also had family to stay for a week so some extra power usage inevitable.

A very wet and cold month meant lots of heat pump and dryer for us.  Power consumption 36% above last month but power bill up only 19% due to lower wholesale energy costs. Plenty of hydro lake water to go around I guess!

Lower power consumption combined with a drop in electricity spot prices compared to June and July has resulted in a significantly lower power bill for August.

Some pricey power this month.  Our most expensive day was Friday 14th July where we used more than $18 of at an average cost of 50c / unit.

We also hit our maximum power consumption for the year, averaging 17 ½ units of power per day, double what we used back at the start of the year.  The increased consumption is most likely due to heat pump, towel rail and dryer. 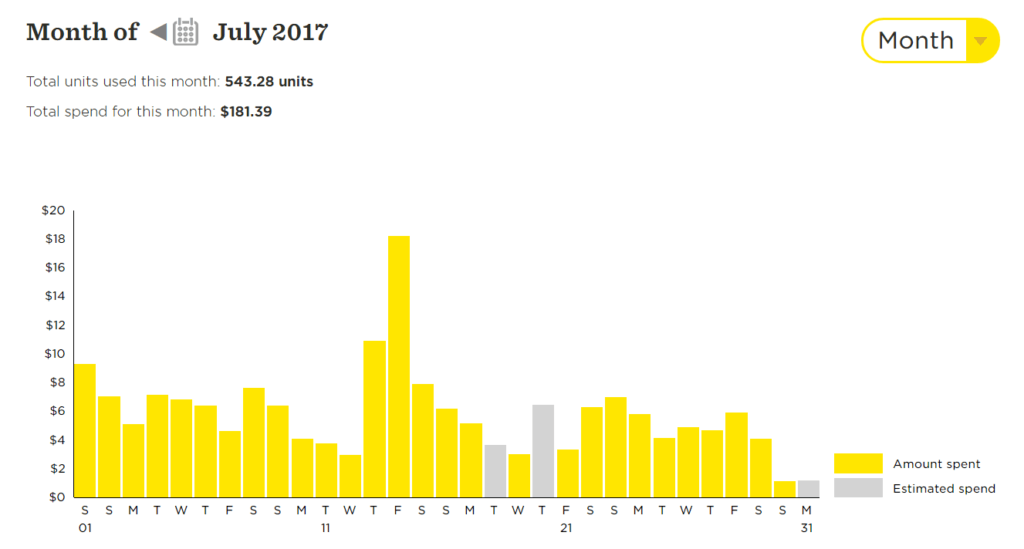 Our May and June power bills are around 2x the summer months due to:

b) It’s been cold and wet. So we have used more power than usual. Heated towel rails, heat pump in the mornings and dryer after work.

With our recent house move, I have decided to move our power to Flick Electric Co.  The business model seems a step in the right direction for the power industry, with our unit cost for power changing in line with the wholesale power market.

We will see how it goes and I hope to provide an update on my Flick experience in a couple of months.

As Flick does not do gas, I have kept our Energy Online account as the mains gas rates were decent and with no contract, we can always switch later.

Energy Online.  Power consumption was over-estimated, this reverses in April.

Our family power bill figures are what we actually paid each month, they include GST and any prompt payment discount.